Desmond Smith is a saxophonist who can still feel the rhythms of old Bermuda in the beat of his walk. He takes us back to a simpler time in music. For him, a lifestyle became a passion, and here he celebrates the people who helped him to succeed, despite his gradual loss of sight. 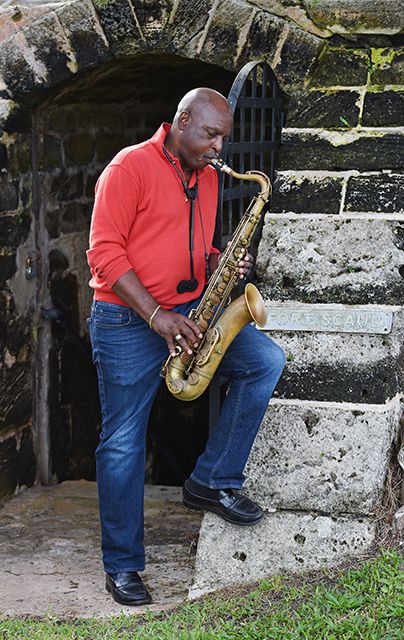 How did you get into music?

I came up around the seaside. My friends and I were avid percussionists.

We used to play congas on garbage cans, we made flutes out of bamboo and drumsticks out of cane sticks, or whatever we could find.

The African rhythm was in me. In my early teens, kids in the neighbourhood decided to start a band together – back then, starting a band was the easy way out of mischief.

In the late 70s, we listened to a lot of Latin Jazz – that music was timeless. There wasn’t any reggae playing everywhere as you see now. Growing up, we listened to Mandrill, they were an American multi-genre band formed in Brooklyn, New York City. Do you know Worlds of Ghetto? “War” was a funk band from California that we loved.

Who supported your passion?

The most supportive person was my cousin, Emily Brangman, who backed the loan for me to buy my first saxophone (It was Selmer Mark 6). She had me work it off for the next two years (over $1000) by giving me my first job at Cambridge Beaches. I ended up playing music at Cambridge Beaches full-time, and the rest is history.

What are the changes that you’ve seen?

As discotheques came in, things got really slow. People didn’t want to hear Latin Jazz anymore. I started to play more at weddings and functions. When reggae came in, though, things started to pick up again.

How does it feel to be on stage? Is it easy now?

It’s a great feeling to make people happy. It was Cecil “Pot” Gilbert who taught me that the better you get, the humbler you get. I’ve taken a lot of lessons: I took my first flute lesson from Maxwell Maybury; Gandy Burgess lived at the hotel when I was playing there and I learned so much from him; then Rags Richardson gave me lessons from ages 18-20 years old. I also learned how to repair instruments from Jack Unque who worked at JMC Music Corp in New Jersey. I could do it really well, too! Until I started to lose my sight in my 40s. I used to be a carpenter and was struck in the eye, a few times. I stay positive though. At least I knew colour and could see at one point.

How do you get by with little sight?

Sometimes you can get away with basic things. The good thing is that I don’t need my eyes to play music. As long as I’m on my saxophone, I don’t need to see. For places that I know, I can memorise the space. If you bump into something once, you never bump into it again!

What are you doing now?

I have my own production company – Celestial Productions. I want to celebrate more Bermudian artists for their talent. We’re looking to mix top local entertainers with foreign entertainers, so instead of just having the Bermudians open up the big shows, they will all play together.