Experiencing yoga on a new level

Iyengar Yoga was developed by BKS Iyengar, who TIME Magazine nominated one of the “100 most influential people in the world”, considered to be the Michelangelo of modern yoga. Before his death in August 2014, Iyengar devoted 76 years of his life to not only the rigorous daily practice of yoga, but also to codifying his method of yoga into one of the most systematic methods of yoga that exists today. Iyengar Yoga concerns itself with the classical purpose of yoga – union of the small self with the larger Universal Consciousness – but it does this through a unique emphasis on consciously and intelligently living through the vehicle of the human body.

For the Iyengar Yoga practitioner, the body is a vast landscape of experiences, feedback, and information. In order for us to experience the deeper layers of ourselves, we must first penetrate every corner of the human body-mind complex and shed the light of intelligence there so that we can truly experience enlightenment from the inside-out. The experience of Iyengar Yoga is an experience of inner self-searching, of unifying the body and the mind so that who we think ourselves to be and who we actually are in reality become harmonious expressions of the same truth.

Mychal first found Iyengar Yoga at the age of 12 in the Downtown Nassau Public Library. “I found one of the original hardback versions of Light on Yoga, BKS Iyengar’s first book on yoga and considered to be the Bible of Modern Yoga in the world today,” Mychal said. “I began to practice yoga from that book. It was my first touchstone of yoga and perhaps also my first exposure to a broadened sense of spirituality”.

Serendipity would lead Mychal to finding his yoga teacher and mentor, Lois Steinberg PhD, who he travels around the world with almost monthly in order to continue to learn from her. “I have always had a passion for learning from the best,” he said. “When I danced in Jamaica, it was with who I felt was the best artistic director at that time.

“When I moved to Cuba, I attended the best dance school there. When I found my way back to Iyengar Yoga, it was after Guruji [an honorific title for BKS Iyengar] had died. I knew had to align myself with a teacher who I felt represented fully the constantly evolving heart of this practice. Lois took me under her wing and guided me through the process of becoming a Certified Iyengar Yoga Teacher. She is utterly magical. Her breadth of knowledge of Iyengar Yoga reflects her 40 years of devotion to this system studying directly with BKS Iyengar himself, and even now she is still learning new things. Even now she returns to India annually to be a student at the Ramamani Iyengar Yoga Institute. She is the embodiment of a true teacher for me. And there is no one else who I would devote the time or energy into studying with as I have done with her.”

In his own teaching practice, Mychal teaches primarily out of his Bahamas-based studio, COSMOSIS. He teaches both general classes and specific classes for common ailments. “One of the defining markers of a skilful Iyengar Yoga teacher is when that teacher can adapt classes that not only permit every student in the class to practice yoga, but also when that teacher can create classes that specifically help and heal the ailments, pains, and body complaints that their students may have,” Mychal said..

After 76 years of practice and working with thousands of students worldwide, BKS Iyengar became the most skilful teacher at adapting the physical postural practice of yoga [asana] to fit the physical and psychological needs of his students. This was a quality that his direct students maintain to this day. From cancer to depression, from knee pain to constipation, one is bound to find an adaptation being made in an Iyengar Yoga class for whatever issues a person may have. Skilful Iyengar Yoga teachers can be found conducting multiple classes at the same time, giving everyone what they specifically need, while challenging everyone to go to their limit and dare to move beyond that in a safe way that emphasizes intelligent movement through the body and active participation of the mind.

“My teacher is one of two Western teachers in the world whose name is synonymous with Iyengar Yoga therapy. I study the therapeutic application of yoga extensively under her mentorship,” Mychal said. “The body breaks. This is a fact. If I didn’t try to learn, understand, and apply what to do for the body when it is broken, I would consider it a disservice to my students, to my teacher, and to BKS Iyengar himself”. In his common ailments classes, he works with knee, hip, lower back, menstruation, neck and shoulder pain, as well as other minor organic issues. 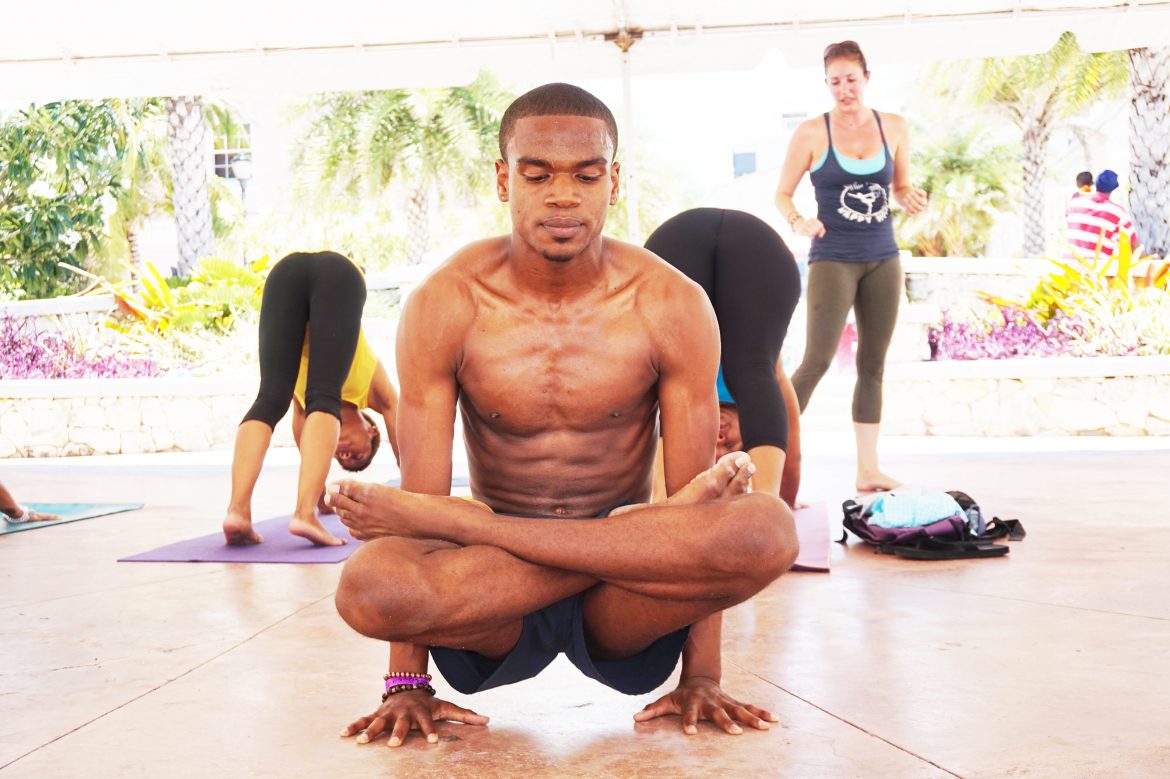 When he isn’t in The Bahamas or following his teacher, he is building his own teaching presence around the world. “I’ve taught in several of the Caribbean countries – Cuba, Aruba, Jamaica, and Puerto Rico. Bermuda is next.” he said. “I’ve also taught around the United States and Canada and next year I’ll expand my teaching roster to South America and Europe.

“My goal is to share Iyengar Yoga in a dynamic, engaging, and light-hearted way that is rooted in the ever-changing heart of this practice. I build bridges and try to create conversations between Iyengar Yoga and other yoga schools. I try to teach and share in non-Iyengar Yoga spaces. Iyengar Yoga people are already convinced about Iyengar Yoga. Most Iyengar Yoga folk in the United States are in their 40’s and older. They don’t need convincing. It’s the younger generation. It isn’t that millennials aren’t practicing yoga, it’s that they aren’t practicing Iyengar Yoga. I want to be a part of the revival of youth, of diversity, and of people of color represented and feeling they have a place within the fabric of Iyengar Yoga.”

“Iyengar Yoga is about systematically taking the mind from its lofty abode somewhere in the head, and spreading it to every corner and curve of the body. In that spreading of our consciousness within ourselves we come to know ourselves, and through that deepened self-knowledge, we learn more about our place and influence on the world around us. People think Iyengar Yoga is about alignment. And it’s not. Physical alignment of the body is only a gateway to a much deeper sense of spiritual embodiment. The true alignment is aligning ourselves with an unbroken commitment to all that is good, to all that represents Love, so that we can be more harmonious members of society. The more people become a part of that movement, the more we begin to change the world into a new vision of what the world can be. For me, that’s what Iyengar Yoga does in the long run, even if I sometimes catch myself just contemplating the placement of my big toe. Our accumulated efforts all add to something truly extraordinary”.