For these Bermuda families, Cup Match is more than meets the eye.

Valerie Dill can only think of one Cup Match she’s missed in the last half a century. Last year her husband, former Somerset Cup Match player, and footballer, Carlton “Pepe” Dill wasn’t well, so they didn’t go. But that’s it, rain or shine, they’ve been there both days of Cup Match from sunup to sundown.

The Dills usually share their Cup Match spot with around 13 friends and family, including their three daughters, their grandchildren and other family members. They’re almost all diehard Somerset fans, with the exception of the Dill’s daughter, Angela Edwards, who is a proud St George’s fan. “There’s lots of good-natured teasing about that,” said Mrs Dill, 73. “We have a great deal of fun.”

Back when Mrs Dill started going, the set up was pretty basic –  folding chairs and umbrellas. Things are a little more sophisticated today with paid spots reserved months in advance. Forget the folding chairs, you can now order bleachers three tiers high. “I think we old-timers tend to stick close to the ground,” she laughed.

Their spot is usually reserved under the name ‘Ruth Riley’, after a good friend who passed away in 2014. “She would always call in January and say it’s time to come to the club and get your spot for Cup Match,” Mrs Dill said. “All her people were sports people.”

Ms Dill said the clubs have a system for assigning spots.“The people that have always been on the list – they offer their spots back to them,” she said. “If you don’t want it then they have a wait list of people looking to get in. They do a good job of managing stuff like that, but a lot of expenses have come to the club due to things like security. These are things we didn’t have to consider years ago.”

Keeping the group fed and hydrated for the two days of Cup Match is a big job, so the Dills have a rota. Some family members are on duty to prepare food for the first day, and others do it for the second day. “It’s just like a big picnic,” Mrs Dill said. “We just do what we have to do and have a good time.”

They always put flags up around their camp.“Somerset did a contest one year to get people to decorate their areas,” Mrs Dill said. “If you won, the next time Cup Match was in Somerset, you would get a free spot.”

Another Cup Match regular, Winston “Coe” Trott said what you get when you reserve seating today is a lot more clearly defined than it was years ago.  Now you’re told exactly where your plot is and how big it is. Previously, things were more lax. You’d just go to the field the night before and rope off your area.

The result wasn’t always good. “People used to fight over it,” said Mr Trott, 74. “There was always a little squabble, that was my spot or that wasn’t my spot.”

Mr Trott favours a spot with a good view of the wicket and a nice breeze blowing through. Back in the day, he played for Somerset at Cup Match 13 years in a row starting in 1968. In 1979, he was part of the team that helped Somerset win the cup for the first time in 20 years. Now, he just goes to watch with his wife Marva, their two sons and grandchildren and other family members. “We look forward to being together those two days,” he said. 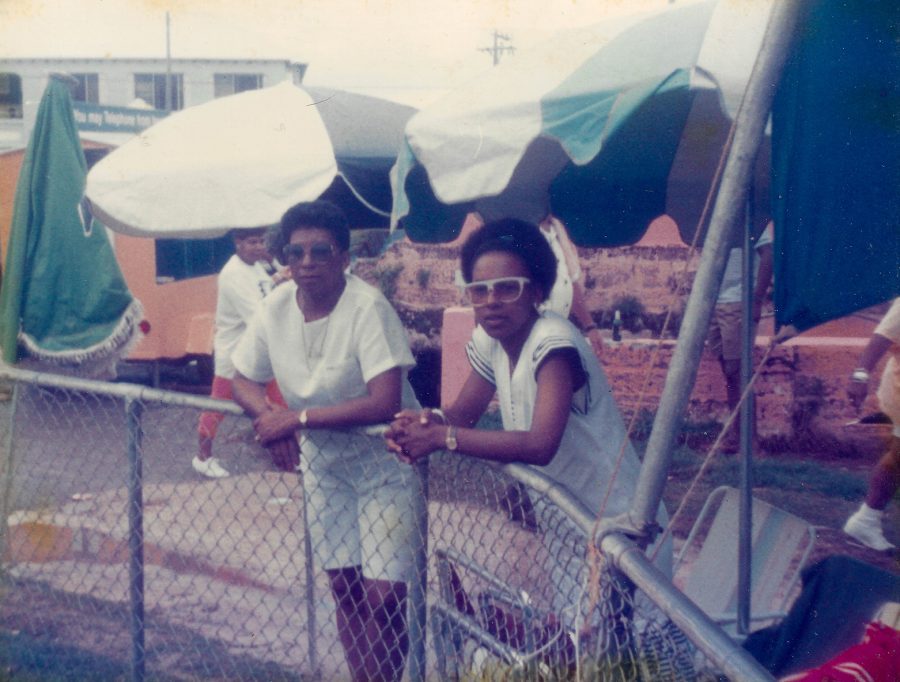 He said watching is a lot more relaxing than playing. “As a player it was intense,” he said. “You were trying to win. With the family you are more relaxed. You are able to see friends and family and hopefully it’s a good game and doesn’t rain.”

Another Cup Match goer, Alicia Zuill has been a lifelong St George’s fan. Her father, the late Warrington “Soup” Zuill was a well-known Cup Match enthusiast and historian. For his funeral, he requested that people forgo the traditional black ensembles and wear their Cup Match colours instead.

The 62-year-old said going to the game, year after year, friendships often spring up between families. “We always see the Foggos and the Minors from St George’s,” she said. “There are a group of people from Somerset who always sit together.  Then you have the former Cup Match players that go with their families.” She said there are even marriages that come out of Cup Match. “A lot of things happen on Cup Match,” Ms Zuill laughed.

Her family always get to the game early enough to catch the first ball. “We’d be there from 7.30am to 7.30pm,” she said.

She remembered how her father, a taxi driver, would often invite tourists into the Zuill Cup Match area.“My father would sit there all day and explain the game to them,” she said. “It was like one big happy family party.”

Mr Zuill passed away in September 2008. There is a Cup Match good sportsmanship award handed out in his honour. Ms Zuill hoped that the rising cost of reserved seating didn’t deter some long time Cup Match supporters, particularly seniors. “They are the ones who paved the way,” she said.

Her family always divides the cost of the spot between the number of adults in it, usually around 20. They also divvy up the work involved in catering to the large crowd. Each person brings a dish to eat: cassava pie, potato salad or chicken, or beverages. “My family will go up the night before to set up tables, coolers, and decorate the spot,” Ms Zuill said. “We put a carpet down. My brother in law, the late Kingsley “George” Hassell, at the end of each game, he and my nephew used to lay off in the middle of the field with fruit and wine.”

Today her brother, Hoyt, is also a cricketer and is the organiser of the Masters Twenty20 Cricket League. Mrs Dill doesn’t see the Cup Match tradition fading out anytime soon. “It is fun, family time with the children,” she said. “You can tell them about Cup Match and what it means. It is very important that the tradition continues on.”