What makes someone a Cup Match “Super Fan”? Simply put, a die-hard and unshakable love for the game. These devotees live and breathe cricket – and aren’t ashamed to wave their team flags, loud and proud. 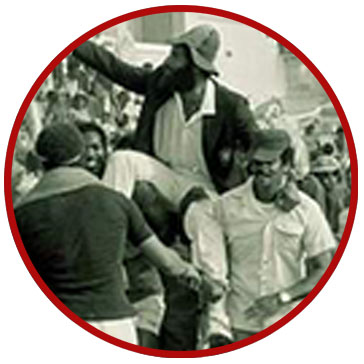 Randy Horton, a third-generation captain of the Somerset Cricket team, comes from a long line of avid sportsmen. His grandfather, Warren Simmons, and uncle, Lloyd Simmons, were both captains of the West End team before him.  As a player, commentator and genuine lover of the game, Mr Horton is a true Somerset Super Fan!

Definitely winning Cup Match in 1979. Prior to that, Somerset hadn’t had the Cup for 20 years. I remember the game was at Somerset Cricket Club and as the day went on it became more evident we were going to win. People came from all over the Island to celebrate. When you looked up at the stands, you couldn’t see any concrete, only people. We had an amazing team – and winning that Cup Match was the best moment I’ve had.

Most memorable moment on the field?

That would have to be my first Cup Match in 1963. I was 18 and very nervous. I went to bat and was out for one bowl. I was clean bowled by Kenny Paul. It’s not a very positive memory, but it’s certainly a moment that I remember.

Who do you consider the best player?

There are three people whose talent I most admire. Firstly, my coach and mentor Alma “Champ” Hunt. For me, as a young boy coming up, he was Mr Cricket. Then there’s Sheridan Raynor. I’m a left-handed batsman, so I always wanted to be like him. Lastly, bowler Eugene “Buck” Woods.

What makes you a  Cup Match Super Fan?

First of all, I love the game! I love cricket and love what goes into developing and having success in a cricket game. The preparations required and the time it takes understanding and studying your opponent. When you go on the field, you take advantage of the strengths and weaknesses of the batsman. You have to consider the conditions of the pitch and how that impacts the game. All of those things make cricket very exciting to me.

As a player, I just didn’t pay attention to the St George’s fans! The Somerset fans were always the exciting ones, and I liked it because the great fans were also great critics of the game. If things didn’t go right, they would let you know. I used to appreciate that, as well as how much people just loved the game and loved Somerset. You felt it as a player. They lifted you up, and you knew they were behind you.

Best way to celebrate after the game?

Just being with friends and being able to share highlights of the game. That’s always fun. Everyone has a different point of view, so you learn from people as you talk to them. 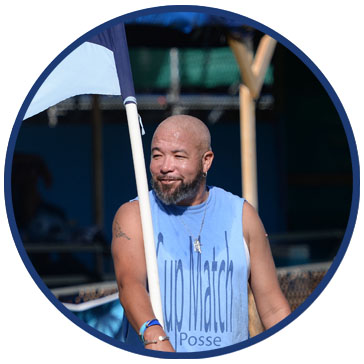 Born and raised in St George’s, Kenny Foggo always considered the St George’s Cricket Club (SGCC) his neighbourhood backyard. “I bleed blue and blue,” the cricket enthusiast said. Mr Foggo is best known for walking the field in past years with a giant team flag and his trademark cut-off denim shorts. Last year an accident claimed one of his legs, however, he plans to be back on the field this year – a die-hard St George’s Super Fan!

Cup Match 1977 – when Clay Smith won the Cup right back from Somerset after losing the year before. That was one of my best moments. Another happened in the late 1990s/early 2000s when Herbie Bascome was first introduced as a skipper. During the second innings defending 128, we bowled Somerset all out from under 128 to win the match. Those are my two favourite moments.

Most memorable moment on the field?

Any time when St George’s wins the match. Everyone gets on the field after the last wicket has dropped and the final runs have been hit. It’s even sweeter when we win the Cup back from Somerset. Retaining it when it’s already ours is never as exciting as winning it back from our opponents.

Who do you consider the best player?

My favourite player of all time is Clay Smith. He’s my best friend, but definitely one of the greatest players of all time too. Respect also has to be given where it’s due to Janeiro Tucker, who is Mr Cup Match. I respect what he has done for the game of cricket.

What makes you a Cup Match Super Fan?

I try my best to carry on traditions from when I was younger. I’m always supporting my team no matter what players are picked to represent St George’s. Whether I’m happy with them or not, I show support. I don’t mind getting into arguments and discussions or having friendly banter, but you’ll never take the St George’s out of me. I’m always the guy with the biggest flag and the shortest shorts. Younger folks are always like, ‘Kenny retire them shorts’, but if I do that then my fans will be like: ‘Where are the shorts, dude?’. I don’t do it for the younger kids, I do it for my supporters.

The real St George’s fans have passion for our Club and for our team – regardless of whether it’s good or bad. The really passionate ones are like me – they have no red in their wardrobe! That’s a sin to have any sort of red in one’s wardrobe.

Best way to celebrate after the game?

It’s all a celebration – whether we have the Cup, don’t have the Cup, win the game, draw the game or lose the game. The biggest thing for me is focusing on the game and the meaning behind the holiday. To me, Cup Match is about the people. Where I sit, I have Somerset fans on one side of me, and St George’s fans on the other. These are people I only see at Cup Match, so the camaraderie and banter that goes on before, during and after the game, it’s all a part of the two days. On top of that, there’s nothing better than an ice cold Heineken.