Dr Mark Guishard, program manager of the Risk Prediction Initiative (RPI) at the Bermuda Institute of Ocean Sciences (BIOS), traveled to Ponte Vedra, Florida to participate in the 33rd Conference on Hurricanes and Tropical Meteorology this past April. Here are some of the take-home points from the annual science meeting, organized by the American Meteorological Society.

Kerry Emanuel, professor of atmospheric science at the Massachusetts Institute of Technology and scientific contributor to RPI, summarized the 2017 Atlantic hurricane season.

Hurricane Harvey, which made landfall in Texas on August 26, 2017 as a Category 4 storm, set a new record for highest total storm rainfall, with 60.58 inches falling throughout its duration. Emanuel found that the probability of a region receiving Harvey’s record-breaking rainfall amount has increased over the last 3 decades. Why? In terms of the rainfall impacts from hurricanes there are two main contributing factors: 1) the amount of water available to the storm to form precipitation, which increases in a warmer atmosphere, and 2) the duration of the storm over a given location.

This second factor was found to have been a major contributor to Harvey’s flooding rains and is consistent with another worrying finding. Dr Jim Kossin, an atmospheric research scientist with the National Oceanic and Atmospheric AdministrationNational Centers for Environmental Information, presented his soon-to-be-published research into the forward speed of hurricanes. His work shows that, globally, over the last seven decades (not including 2017), the forward speed of hurricanes has decreased 10 percent and that, near land, these effects were even more pronounced.

Scientists estimate that with each degree Fahrenheit that global surface temperatures increase, the average rainfall from hurricanes could increase by around 10 percent. Kossin’s new research suggests that this increase could potentially double due to this slowdown in hurricanes’ forward motion. In other words, hurricanes now have a longer duration over land on average when compared to storms on historical record, leading to longer-lasting impacts like flooding rains. 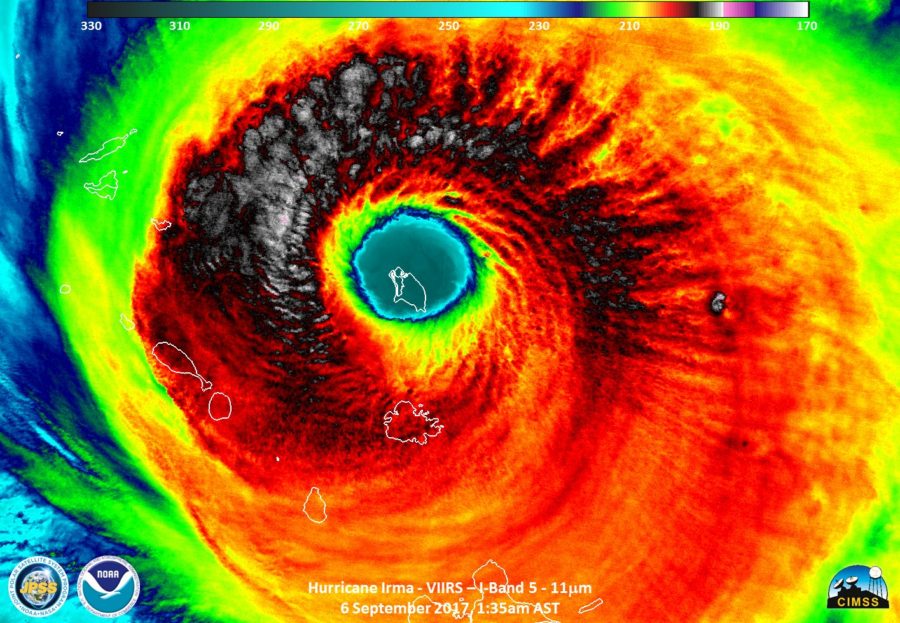 Hurricane Irma, which first struck the Leeward Islands on September 5, 2017, had sustained Category 5 winds for 37 hours, the longest ever recorded. Irma was also the strongest Atlantic hurricane ever recorded outside the Caribbean and Gulf of Mexico, and is tied with two other storms as the second strongest hurricane ever recorded in the Atlantic. In terms of climate change, Emanuel and his colleagues found that scenarios givingrise to these rare peak winds in the Caribbean resulting from hurricanes may actually be on the increase.

Overall, the 2017 hurricanes caused more than US$300 billion in damages, making it the costliest season on record. Hurricanes Irma and Maria devastated small islands in the Caribbean, such as Dominica and Barbuda, and the British Virgin Islands and Puerto Rico are still recovering, even on the eve of this next hurricane season.

Dr Eric Blake, a hurricane specialist with the National Hurricane Center, compared the predictions for last hurricane season with the recorded storms and declared the predictions to be an “epic fail”. Even given a perfect Atlantic hurricane forecast, there is still little insight into what path storms will take until they’ve formed and started moving. So, as Guishard points out, seasonal predictions of total counts of Atlantic hurricanes are all but meaningless in terms of calculating landfall risk, or the chances that a hurricane will make landfall in a given area. You can have an abundance of storms form during a season that do not impact anyone; conversely, a relatively inactive season can have large impacts. When Bermuda was hit by Hurricane Emily in 1987, for instance, or 1992 when Hurricane Andrew was the only major hurricane to develop, devastating the Miami (Florida) region.

This notion is supported by research at BIOS. In 2016, Thomas Perkins, an intern from Cambridge University, and Guishard (RPI) found that the risk from Bermuda storms is greater during El Niño conditions, which tend to suppress overall Atlantic hurricane development. This point echoes one that Guishard, who used to run the Bermuda Weather Service, has made many times: “It only takes one storm to make it an active season for you”.

“We’ve been fortunate to not be impacted as badly as our neighbors to the south in the recent past,” Guishard said. “Even with the direct hits of Hurricanes Fay and Gonzalo in 2014, and Hurricane Nicole in 2016, we suffered no direct loss of life, and the worst conditions in each storm came at low tide, sparing us from the most damaging storm surge”.

Remembering last year’s anomalously high tides and coastal flooding in October and November—which were unrelated to hurricane activity—Bermuda should take note that those tidal ranges may be the new normal by the middle of this century. “Imagine storm surge conditions on top of sea level rise and it’s easy to conceive of a doubling of our coastal risk by the time our children are middle-aged,” Guishard said.

The RPI was established in 1994 as a collaboration between the reinsurance industry and natural hazard scientists. RPI has spent over two decades answering industry questions about climate change, natural catastrophes and hurricane risk. Recently, RPI increased its local focus on community outreach and education regarding climate and disaster risk. For more information visit the Bermuda Risk website at http://bdarisk.bios.edu.