How art is changing the Hamilton cityscape

Look up more. The commercial building landscape throughout the City of Hamilton in Bermuda is changing beyond just its bricks and mortar. Art is actively taking shape two- and three-dimensionally on the façade of an increasing number of offices, retail locations and prominent hotel properties. As more structures are undergoing renovations or complete knock-downs and rebuilds take place, the exterior “skin” of commercial buildings (also referred to technically as the “cladding”) are integrating grand scale art walls, 3-D structures and designs in a wide array from a growing number of international and local artists.

Now look deeper. The impact of art on the exterior of commercial real estate is more than meets the eye, the art itself, or the building alone. All three elements combined generate greater qualitative and quantitative value to the structures, their cityscape and a burgeoning art medium. Statement pieces placed prominently offer public access, tend to improve the aesthetic appeal of a property’s otherwise repetitive brick or cement or glass siding.

Some commercial, sub-prime areas and industrial communities thorough Bermuda, just as in other islands and cities, are visibly the backdrop of one form of art one may perceive in its crudest form as graffiti. Unauthorised graffiti, generally attributed as the outcome of adolescent rebellion or gang-related activities, have signified one’s presence or memorialised love or hate of someone or something using symbols or tags.

In stark contrast, perhaps by evolution of a former graffitist, muralists are creating art-for-hire with elaborate painted images in large scales to cover even full sides of commercial properties. Coupled with the proliferation of social media posts by owners, tenants, onlookers and tourists, the visuals created draw attention to the art itself, the building, neighbourhood, town, city, state or country.

Bermuda’s newest example is the arrival of the Greetings Tour with the Greetings from Bermuda postcard colour mural strategically placed for high visibility over the parking lot on the side of the newly renovated office building, Dorchester House, on Church Street. Our company, Rego Sotheby’s International Realty, has had Dorchester House on the commercial rental market in recent months and seen the number of rental inquiries increase since the art installation occurred.

The building has also captured more attention from the public and tourists who snap selfies and pictures, and post them to their social media platforms. An otherwise ordinary white side of a four-storey office building is attracting a wider audience.

The creators, muralist Victor Ving and photographer Lisa Beggs, packed up their lives into an RV and have thus far created over 35 murals and counting in numerous states across the United States and crossing borders into international waters.

Mr Ving said his first impression of Bermuda was that “the island felt very clean and calm. We pulled the colour scheme from all the buildings and the imagery sums up the entire place.” Mr Ving said their large-scale murals have generated tremendous positive reactions “creating destinations bringing business to local businesses”.

As another form of art, sculptures are noticeably also taking up positions of prominence such as the gigantic Mickey Mouse statue called “At This Time” by New York-based artist KAWS (also known as Brian Donnelly) outside the Hamilton Princess Hotel. KAWS got his start doing graffiti.

As E.A. Bucchianeri put it best: “Art is in the eye of the beholder, and everyone will have their own interpretation.” But the positive effect of art on commercial properties is undeniable. Proponents and effectors of this emphasis of exterior building and grounds art are the Green family. Through their real estate acquisitions and redevelopments cited above, the Greens have improved the public, tenants’ and visitors’ experiences, whether at the Hamilton Princess and Beach Club they acquired back in 2014 to their latest office redevelopment at Dorchester House where they commissioned the Greetings Tour. 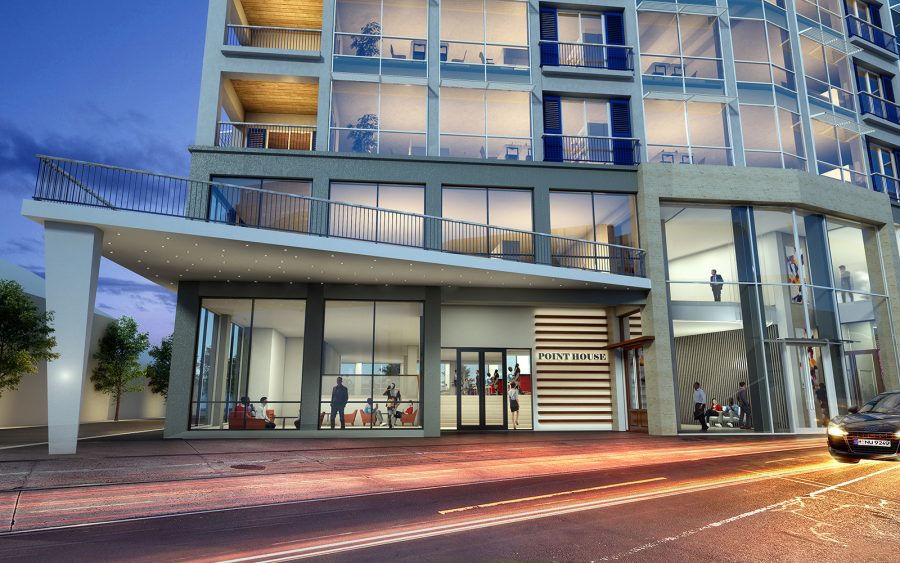 Their latest project is under way at Point House on Front Street in Albuoy’s Point area. Art — yet to be selected — is conceptually expected to vertically grace the new seven-storey building, further elevating the location with an iconic property visible from the harbour and down Front Street and Pitts Bay Road.

“The modern-day postcard is eye candy,” according to Mr Ving. The qualitative effects of art on commercial real estate are priceless, creating visually pleasing cityscapes. As Mr Ving observed: “Art feels safer. Knowing someone was there doing it. You’d be surprised how art transforms communities.”

This article was originally published in the May 2019 edition of the RG Business Magazine.