Sir John Swan talks to us about Leadership

Sir John Swan is a former premier of Bermuda, a real estate mogul, has sat on many boards and guided many organisations and individuals to success. He sat down with RG Business to share his thoughts on Bermuda’s future in leadership.

Kristen Scott Ndiaye: We wanted to talk to you about this because even though you’re not in politics, necessarily, I would imagine that you – your brand, and your actions – still have a responsibility of a leader in Bermuda. What do you think?

Sir John Swan:Anyone who’s been given the privilege that I’ve been given – I had parents who had confidence in me as a young person, forced me to go abroad to get an education and, though I had dyslexia, had the word “failure” taken completely out of my lexicon. I should feel responsible for helping Bermuda to achieve its goals. Though not political, I feel intellectually responsible for making sure that Bermuda is headed in the right direction.

KSN: Right. Now, you didn’t start out as a leader. You’ve described your playground as Pembroke Marsh and just shared that you had your share of hardships – dyslexia, visual impairments. From there, what has been your journey to leadership?

JS:After school, I came back to start a business that, for 10 years, built 40 percent of the homes on this island. I belonged to organizations and served on many boards, both locally and internationally, which gave me a broad view of Bermuda and the rest of the world. This led me to become premier, where my job was to make Bermuda as viable and as functional as possible through policies and programmes. I was physically responsible for the country, but at the same time expected to act with a social conscience.

JS:Well I try to remain relevant, not only in business, but in all sorts of other activities that affect Bermuda. It requires a lot of reading, a lot of studying and staying on top of what’s happening locally and internationally, and learning to change with the times. 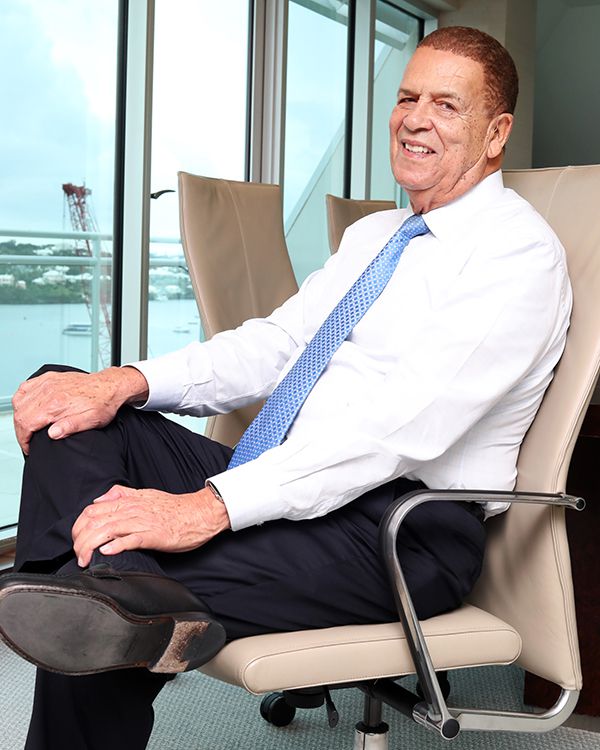 KSN: Of course, and we know that it’s important in business, and in life, to be able to pivot. How do you do this?

JS: Every ten years I would reassess my business and decide whether it needed to be changed. In order to pivot, you have to learn to remake yourself both physically and mentally. The world of change is speeding up. The intellectual process includes 1) your ideals – what you stand for; 2) your ideas– which come to mind from your ideals; 3) things – which are what you create from your ideas; and 4) people – those who use the things that you create. If these don’t line up, then it’s time to change.

KSN: How can other leaders do that?

KSN: So, you would say that success is not gained alone. Would you say that seclusion is the enemy of creativity?

JS:It’s a tough question, because there are a lot of people that do a lot of productive thinking in seclusion. You have to find a balance. I call it the “Iceberg Effect”: 9/10 preparation and 1/10 effect. Anytime I give in my career, I make sure it’s something worthy. There’s a lot of research that goes into my speeches and my articles. If I don’t plan in seclusion, it makes for an uncomfortable outcome.

KSN: More on those uncomfortable places in leadership: what advice do you have for those moments?

JS:To that I say do unto others, as you would have others do unto you. Everybody knows that I’ve been in some uncomfortable situations. Leadership is about raising people up. Sincerity, integrity, forthrightness are all very important qualities in a leadership role. Be prepared to stand behind anything that you say and take the consequences for it.

KSN: When you say things like that, I have to say that you’re an inspiration to many young people on the island. Are you aware of how your image drives young men, especially, to get into business?

JS:I’ve always had a good relationship with young males in Bermuda. I think that comes from trying to fulfill the image that I give off, and leading not from policies, but from setting a standard – a standard in what you say, in how you look, how you conduct yourself in a particular set of circumstances. When people see me, there’s a consistency. They know who I am. They know that we can have a two-way conversation about whatever they need to be a leader in the community – that doesn’t necessarily mean government, it could mean at a school or on a football field.

KSN: What advice do you give them?

JS:Many people want to receive and don’t understand that it’s when you give, that you get back the encouragement to succeed. I say, give your honest opinion, and not the one that you think you’re supposed to give. From a young man in board rooms, I was invited to be a part of the Young Presidents’ Organization; because I said what I thought. You want to make people re-evaluate their thoughts. But don’t be forceful, that’s how people shut down.

KSN: That’s true because some people who experience the great success in leadership, find that it brings out the worst part of their personalities. What do think about that?

JS:Sometimes people get caught up in their egos and they believe that they know everything. I think it’s the biggest mistake that people make. It’s important to be humble; and to work together with others to find your potential and vice versa. If you think that your leadership or your success is based solely on you, then you are doomed to fail.

JS:The world is going through a very uncertain period as a result of the technological revolution in the past 25 years, forcing us to redefine the norms.  We went from the whole world sending messages at 780 miles an hour – the speed of sound – to sending messages at 196,000 miles per second – the speed of light. That’s how information is flowing. Everyone has access to information; but some are trying to hold on to the old world.

Innovation in leadership looks like bringing energy back to Bermuda. Right now, Bermudians are going away to school – London, Toronto, New York – and coming back saying, “What am I doing here?” They have to feel like they can continue their education, and contribute. Some young Bermudians are just staying away because there’s nothing here for them. Leadership looks like asking Bermudians about what they want, and facilitating it, not dictating it. It’s a commitment to making Bermuda a viable place for everyone – even if it means bringing people in to get the job done. We have to step on new ground.

KSN: What is your vision for our island in the future?

JS:Whether you are a corporation or an individual in the leadership role, make Bermuda a place that everyone feels proud to participate in. There’s been a withdrawal, and a fear in people that if they say something there will be grave consequences. There is nothing more damaging than fear. I hold the leaders responsible not to inject the fear in others. Let’s reconstruct Bermuda.

KSN:Thank you so much for sitting with me.

Movers and shakers: news on hires and promotions in Bermuda business