It was right after he graduated from college, around the time he met and fell in love with a girl enrolled in art school, that Lee Greene started to explore his creative side.

In just one summer in 1998, he drew around 30 black and white chalk pieces on canvas – paying homage to the musicians who inspired him most. From blues great BB King, jazz singer Nina Simone and reggae legend Bob Marley, to rock icons like Mick Jagger and Steven Tyler.

Then, to make a long story short, he took some of the pictures he had drawn that summer, put them in a box and packed them away for over a decade.

“The box had come with me when I moved from the States to Bermuda in 2000 and had stayed in my closet in Somerset until 2013. It wasn’t until I moved that I discovered the box again. I said ‘I bet you all these pictures I drew were destroyed’.

“One night I was sitting in my new apartment on Harbour Road and decided to open the box, and as I pulled out the first picture, I was like ‘Wow, this is pretty nice. I need to start back doing this’. That’s what kicked my passion for art back off because I had time again to devote to it and it was something I really wanted to do.”

Growing up Lee had always had a natural aptitude for art. Around age eight or nine, he would doodle and draw his favourite cartoon characters in his sketchpad. But as he got older, he stopped seeing the artistic pastime as “cool” and chose to instead focus on sports and education. 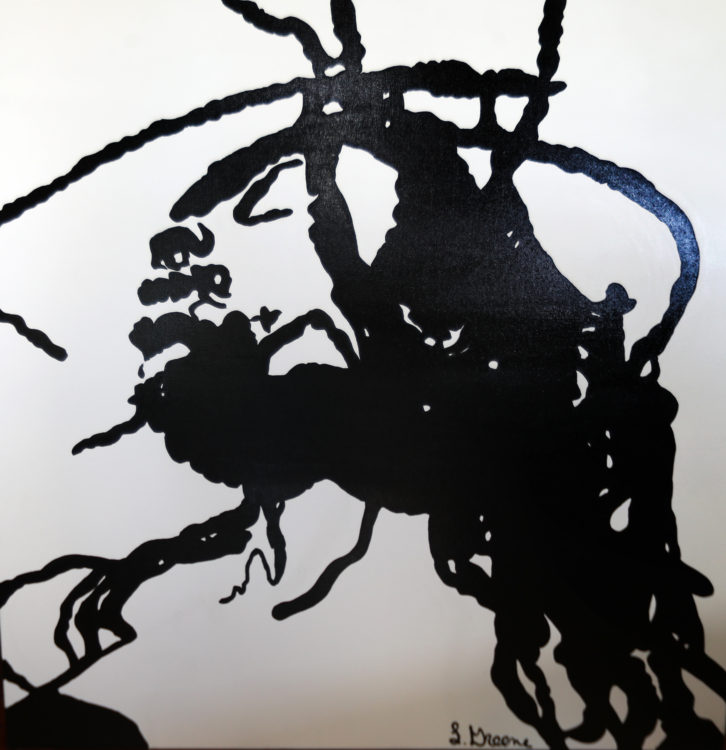 Even up until now, he admits he’s pretty confident about most things, yet when it comes to art, he’s struggled with accepting the ‘artist’ label.

Three years ago, that all began to change when Lee started visiting different local galleries like Masterworks and Bermuda Society of the Arts: One day, he showed local curator Nzingha Ming some of his pieces – she suggested Lee could put on an exhibit of his own.

“I started laughing,” he said. “I said ‘Not me’ because I was still at that stage of comparing myself to other artists.”

Instead of hosting a big display, he started small by posting his works on social media. He was overwhelmed by the response that poured in through comments and likes. It gradually built his confidence.

Eventually, in December 2016, he gathered up the nerve to host his first exhibit at BSOA. “I went into that art show with no expectations, and the feedback, encouragement and positive words I got from everybody was just so incredible,” he said.

“People reminded me that God didn’t give me this talent to keep to myself; He has given me this ability to show people and if what I’m doing inspires someone else then great. If someone likes and appreciates it then awesome.”

More recently, his works have allowed him to pass on his love of music to his daughters. The girls often ask about the musicians or celebrities in the pictures; Lee uses it as a teaching opportunity. “All of the people I draw are people I admire,” he said.

“They have contributed something back either through civil rights, activism or charitable giving. While I was researching with my girls, I was learning things I didn’t know. The best part is I’m able to teach my children history in a non-traditional format through art.”

This story was originally published in the Summer 2018 edition of RG Magazine.