Fernando Oliviera has transformed his passion for the automotive “gearhead” culture into not just a career but an all-encompassing way of life.

He has coupled his enthusiasm for motor vehicles and auto mechanics with teaching, building and racing carts and bikes both in Canada and Bermuda, mentoring young people, community service projects to teach seniors the basics of Do-It-Yourself car maintenance and, most recently, the retail sector.

Oliviera founded what is now his Noble Automotive Enterprises group in the grounds of the CedarBridge Academy senior secondary school in 2012.

But aside from offering professional services ranging from routine maintenance to major repairs, Noble Auto has always boasted an additional feature which has set it apart from its competitors.

From the day its doors opened the garage has been associated with CedarBridge’s flourishing motor mechanics and electrical engineering programme. allowing students to get a first foot on the automotive career ladder by enrolling in the service centre and training facility’s apprenticeship programmes.

Structured by the National Training Board, these hands-on courses  have touched on everything from automobile and motorcycle repairs to participants gaining experience in the accounting and administrative departments of the garage.

Within four years the success of that programme 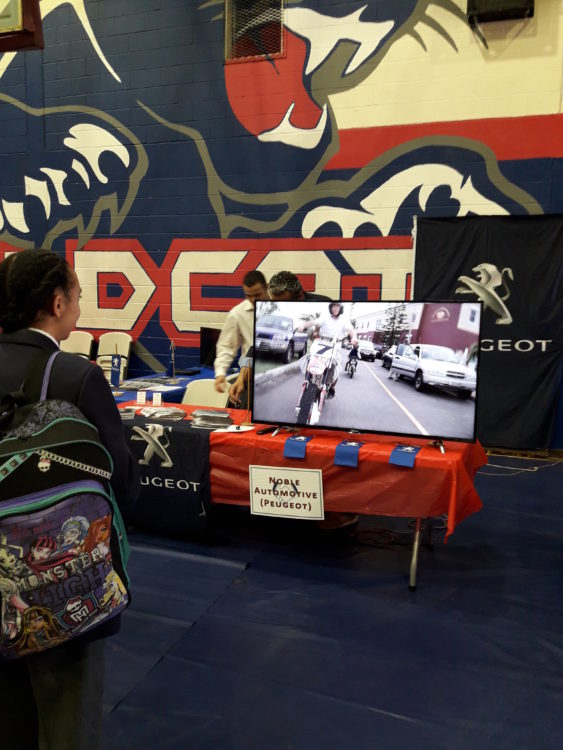 For Oliviera, who gained a wealth of experience at car dealerships in North America and the Bahamas working in sales, service and management positions, the move into retail was a natural progression.

“The opportunity came, which was rare, and we had grown to our limits here at CedarBridge size-wise,” he has said.

“Without compromising our student programme, we had to have more space. It was the next progression for us and a good opportunity to grow the apprentice programme with dealer training as well.”

An outlet in the Washington Mall, where a number of popular Peugeot models are on display, continues to attract considerable walk-in business from city workers and shoppers since opening.

And Oliviera is now making good on the promise he made when he took over the Peugeot distributorship to expand the range of the French manufacturer’s vehicles available in Bermuda, on both the personal and commercial transport fronts.

In fact the most recent addition to the Peugeot Bermuda fleet arrived on the island this spring,

Compact, stylish and comfortable, the Peugeot 108 – called the “Lion Cub” by staff – is not only one of the newest automobiles on Bermuda’s roads it is currently the island’s only “A” class vehicle.

Introduced in Europe in 2014 and available in three-door hatchback and five-door hatchback versions, at 11.38 feet in length the 108 is the smallest car in the current Peugeot range.

Designed to look and feel like a sports car, the 108 features the creature comforts of larger, more expensive vehicles and is well suited to Bermuda’s narrow roads and lanes and awkward corners. It also it excels when navigating the island’s sometimes traffic-congested roads – and can fit into the smallest parking spaces.

The 108 joins such other popular Peugeot ranges in Bermuda as the 2008 Crossover, a compact F-class sport utility vehicle which is the larger cousin of the manufacturer’s 208 HB — itself another staple of local roads.

And like the classy supermini it’s modelled on, the 2008 features a combination of elegant design and practical functionality.

As a family car its sizeable trunk, plentiful interior room and numerous safety features have earned the 2008 high marks from Bermuda drivers who want to transport their broods comfortably and with little risk of mishap. Add in its style, performance and handling, and it’s not surprising the 2008 has established itself as a mainstay in the island’s family car market.

And with one eye on the future of the automotive industry, the Bermuda distributor is now accepting special orders for the Peugeot iON – a fully electrically powered vehicle.

Described by one critic “as a triumphant entry in the electric car market”, the compact four-seat hatchback has won praise in driver surveys in international markets for its reliability, simplicity and convenience.

With a surprisingly spacious interior given its length is just over 11 feet, the iON is powered by a lithium-ion battery mounted under the centre of the vehicle. Able to be recharged from a standard electrical socket, the car can travel for more than 90 miles on a single full charge

The virtually soundless iON’s is noted for accelerating strongly and smoothly up to speeds which are considered standard in Bermuda.

In fact the green vehicle has been said to “embarrass the many small petrol- and diesel-powered vehicles” it routinely overtakes in the European cities where it is most often seen.

With a polished and sophisticated styling intended to hit all of the aesthetic marks, the iON has a more streamlined, eye-catching profile than many earlier — and bulkier – generations of electric cars.

“Peugeot does have a good fit for Bermuda, although, unfortunately, some of the models couldn’t be imported here in the past,” Oliviera has said of his decision to expand into the highly competitive Bermuda automobile retail market.

“We want to build confidence in the brand and bring in as many models as we can, including the commercial models.”