Bermuda is quickly turning to alternative sources of energy to meet the growing demand for electricity. The government and several private companies being the forefront of this renewed effort. Solar power is one of the alternative sources of energy being utilized. The energy is generated directly from sunlight using specially built solar photovoltaic systems that constitute an inverter, mounting frame, cable and solar photovoltaic panels. The growing number of people embracing solar power in Bermuda and other countries are enticed by the many benefits it offers. According to a Stanford University submission, the benefits include: its abundance, renewable disposition, high levels of sustainability, low noise, low maintenance and environmentally friendly operation. The cost of solar energy is also significantly lower compared to that of conventional sources such as fossil fuels, which constitute natural gas, coal and petroleum.

Fossil fuels can be depleted and are generally more expensive to extract and process compared to solar energy. Research conducted indicates that using solar energy can offset the emission of dangerous pollutants such as Carbon dioxide, a leading cause of environmental degradation and global warming. According to the Government, Bermuda Planning Statement blue print of 2008 encourages the development of renewable sources of energy and installation of the electrical implements in all zones at the discretion of the Development Application Board. Towards this end, the department of planning has approved thousands of applications for solar hot water systems. According to estimates given by the government, two people in Bermuda consume about 3 to 5 kilowatts of electricity annually. The electrical output of the solar system mostly depends on the installed capacity and the efficiency of the module used. 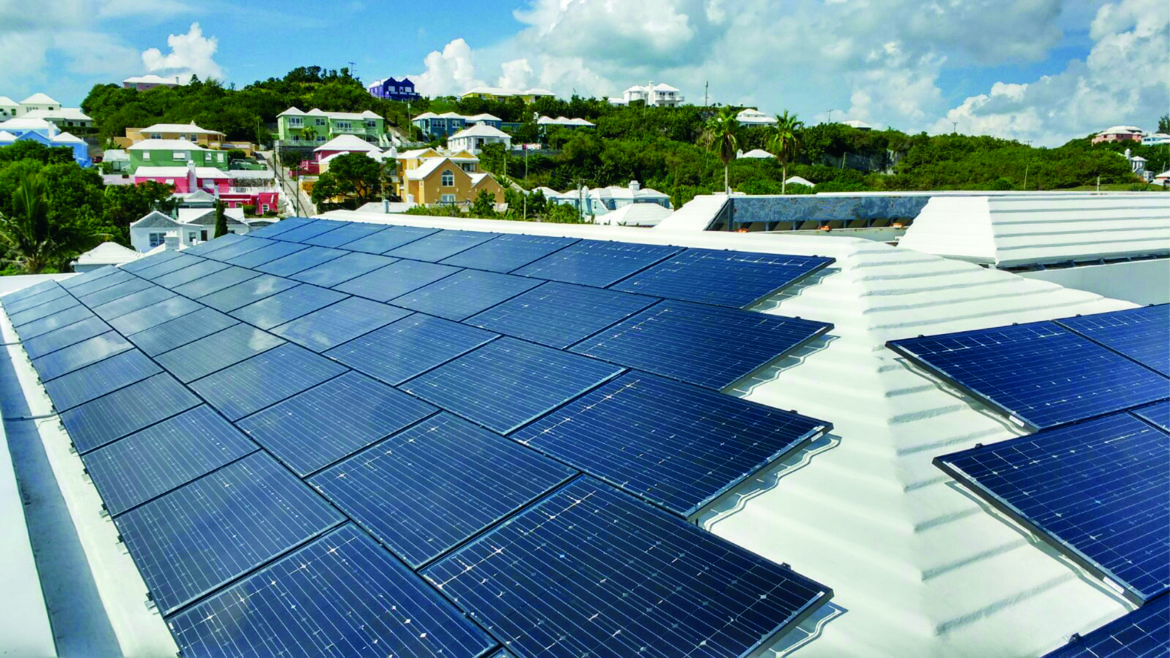 The most commonly used types of solar modules are the Polycrystalline silicon and Monocrystalline silicon. The cost of installing a kilowatt in Bermuda is around $4,000 to $6,000. A good solar photovoltaic panel can last between 25 to 40 years. However, the inverter may need to be replaced after 5 to 10 years. According to renewable energy experts, good solar photovoltaic panels and inverters for domestic use should be UL1703 and UL1741 listed respectively. The inverters should also comply with regulations IEEE 1547. For most islanders who have chosen to install solar panels, there is always the fear that a hurricane can sweep away the panels and cause power disruption on its wake. A certified solar panel technician should advise on the safest location and angle to place the panels and how the system should be integrated into the home setup. For optimal energy yields, homeowners are encouraged to place their panels in non-shaded areas.

Just like the roof erected in a home, the stability of the solar photovoltaic system to withstand inclement weather greatly depends on its design, construction and the impact of the hurricane or severe weather. If you decide to connect your system to the national electric grid, you will be required to sign an agreement with BELCO, our sole supplier of electricity. The privately-owned firm also operates its own power generating plant. Signing an agreement with BELCO ensures small scale renewable energy sources remain aligned with that of the national grid. Besides investing in solar energy, the government is also encouraging locals to invest in energy efficient appliances in a multi prong approach designed to reduce energy cost and conserve the environment. The appliances targeted include ventilation systems, lighting fixtures, refrigerators, water heating systems and air conditioning systems among others.

One of the companies dedicated to providing the highest quality solar and energy efficiency solutions is BE Solar. Founded in 1935 by Gordon H. Burland who pioneered the first wind turbine, micro-grid and solar water heating system, ‘The Bermuda Sun Heater’ in Bermuda.

“Being energy efficient is typically a lower cost price tag where that people can install LED bulbs, timers on closet heaters, towel warmers and hot water heaters, in addition to settling your thermostats to 74 degrees in the summer.”

“No doubt, you will get a return on investment and this is typically within 5 to 8 years depending on the installation and project scope. Once the system is interconnected you are earning savings right away.”

BE Solar has installed over 400 solar systems since 2010 and are the leading residential installers, now completing larger commercial systems.

He added: “Going solar helps reduce the cost of living, helps people save money, helps reduce our reliance on fossil fuels, helps Bermuda lead by example to negate the effects of climate change, helps clean the air and helps the island to become energy independent. We should all lead by example and make sensible decisions to reduce energy consumption.”

Furthermore, a solar farm could be up and running at the new LF Wade International Airport before the end of the financial year.

Minister of Transport and Regulatory Affairs, Walter Roban, said that work was scheduled to prepare the site within the next few weeks.

The development of the six-megawatt solar farm at the munitions pier of the airport will serve up to 13 per cent of peak demand.

Plans to erect a solar farm on the pier, also known as “the finger”, have been discussed for several years under both the OBA and PLP administrations. One Bermuda Alliance government put out a Request For Proposal for the site in December 2016 with the goal of selecting a developer by April, 2017.

The RFP proposed the Government should fund site preparation, which would be recovered from the rental income for the estimated 15 acres that will be leased to the developer.
There were 29 submissions, of which 19 met the criteria, with potential bidders from Bermuda, Canada, Spain, the United States, Germany, Britain and Australia.

HOW TO USE A FIRE EXTINGUISHER

Should You Shelter In Place?

Stock Up Your Medicines