When talking to Alshante Foggo you begin wondering what might happen if she were to ever embrace the dark side of art. It is a difficult concept to come to terms with given her boundless energy, most, if not all of which, seems to be positive.

It is an energy that is immediately noticeable when we sit down and chat at her office in Hamilton one morning, after she has returned from an earlier meeting in St George’s.

The happy place from which she produces her work is there for all to see; it is in the murals that decorate the city and some of the island’s schools, it is in her paintings, and her clothing designs. In fact, we are unlikely to ever see the dark side from Ms Foggo because she denies it the oxygen that would allow it to become a living, breathing entity.

“My art is happy energy, good energy, peaceful, it’s bold. I try to incorporate stuff that looks happy and fun, and youthful in some way. I don’t want it to be dark and sad in a sense,” she says.

“I try to explore more the warmer side of arts and colours, rather than the darker, deeper sort of things.

Artists are driven by their emotions, sometimes I’m not in the [right] mood to be creative, and if I’m not in a good space I will get up and leave it [the piece] alone.

There is an almost child-like naivety in an approach where stopping is preferable to exploring something difficult inside us; the darker elements of art that speak to a harsh place we would often prefer to ignore.

Which is not to say that Ms Foggo does not challenge herself as an artist, she does, but not necessarily emotionally. She pushes boundaries when it comes to using different mediums, which is how she ended up doing body painting.

Body art is not the first thing that comes to mind when thinking about Ms Foggo, who is more famous for decorating the clothes and shoes that people wear than using skin as her canvas. 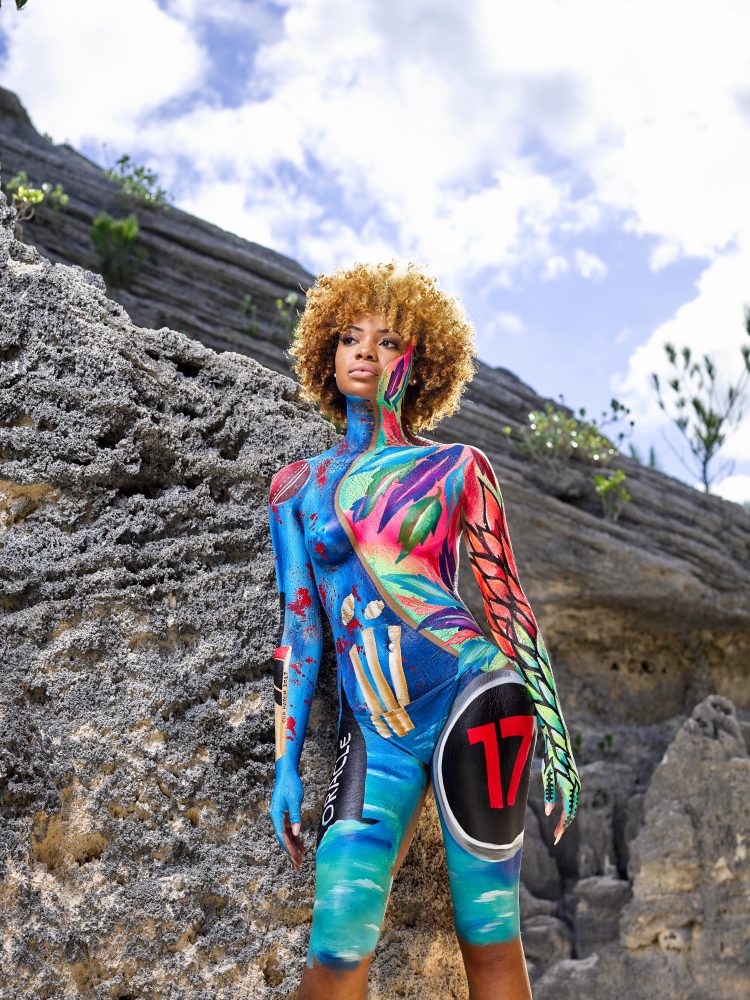 Still, she has been dabbling more and more with the medium since being asked to get involved in a project for the City of Hamilton and the Bermuda Fashion Festival a couple of years ago. Since then she has explored the medium more and more, usually helping people with costumes around Bermuda Heroes Weekend, or with one of the several glow parties that take place on the island.

“I don’t think it [body painting] changes [my approach],” she says. “The model has to keep still of course. The first time it was a matter of seeing how it came out, how it lasted, trial and error – using some of the paints I use for walls or shoes, and seeing how it can work on the body.

“What I usually use is acrylic paint, so it’s very vivid and it comes out nice and bright on the body but then the duration of it, it cracks if it’s on too long, so you have to figure out what to use.”

Much like her personality, Ms Foggo’s approach to art is largely carefree, and by her own admission her best work comes “when I am not given structure, I personally feel it works out better when I [go with the] flow”.

She hopes that soon she will be able to show the island that carefree approach in her first solo exhibition which is coming “before the year is out”.

“I want the whole island to attend,” she says. “It is going to be my heart and soul put into this project. I have been developing this for a few years. I am just trying to take my time with it, so that I love it and I am completely satisfied with what I put out.