Book Review: Into the Raging Sea

Thirty-Three Mariners, One Megastorm, and the Sinking of El Faro 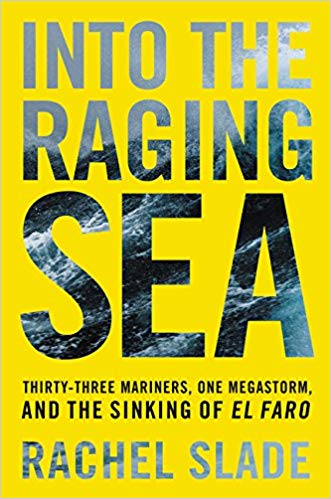 I’m generally not a fan of non-fiction – as in I’ll rarely pick up a true story on my own volition.  So to have read not one, but two non-fiction books in the span of a couple months is pretty incredible (especially if you saw the contents of my to-read pile). However, I still can’t stop thinking about Into the Raging Sea– or recommending it to people, fiction and non-fiction lovers alike.

Journalist Rachel Slade brings to life the story of the ill-fated El Faro, which sunk off the coast of the Bahamas during Hurricane Joaquin in October 2015. Slade takes this story, with an ending, sadly, we already know, and manages to make it as gripping as any psychological thriller all while bringing to it the heart and soul of each and every one of the 33 souls lost on the ship.

Through hours of voice recordings from the ship’s “black box” to interviews from the family members of the ship’s crew and maritime experts, she weaves together a story that still brings me to tears. There are lessons to be learned here, including the devastating power and unpredictability of hurricanes as well as the cutthroat history of the shipping industry. While we’re still deep in hurricane season, this is a book not to be missed.

There’s a theme in book publishing this fall and it’s all about Greek mythology. First up is “Circe” by Madeline Miller, telling the story of the daughter born of the gods but who turns to the world of mortals for companionship. Passing down the Greek myths through many millennia means there are many interpretations. Stephen Fry’s “Mythos” brings together these stories in Fry’s entertaining and informative retelling.

Sarah J Maas has a new “Throne of Glass” book out at the end of October, but in the interim fans who can’t get enough of Maas can indulge in DC Icons Series and enjoy her take with “Catwoman: Soulstealer”. Other Icons in the series written by other sought-after YA authors include “Wonder Woman: Warbringer” by Leigh Bardugo and “Batman: Nightwalker” by Marie Lu.

New non-fiction currently burning up the charts includes “21 Lessons for the 21stCentury” by Yuval Noah Harari, one of today’s most innovative thinkers exploring some of the world’s most pressing issues. And for Bruce Lee and martial arts fans fans “Bruce Lee” by Matthew Polly is an authoritative and most comprehensive account of the actor’s life that also features dozens of rarely seen photographs.